From September 5th - 9th, 2007, Louix Dor Dempriey made his debut in the San Francisco Bay Area. Highlights of this tour included:  a Public Darshan, a filmed interview at the Medicine Buddha Temple, and a Residential Retreat. 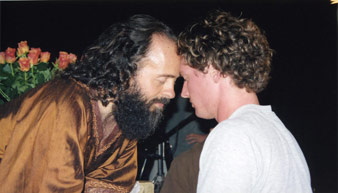 On September 5th, the Public Darshan was held at Open Secret Bookstore in San Rafael. From the moment Louix entered the room, the Divine energies were palpable. On the heels of his opening meditation to cleanse the chakras, Louix spontaneously dispensed with the evening's planned program—the Shakti visibly roaring through his body—and began anointing every person as they approached where he was seated, speaking Revelation to many. Tears flowed, some laughed ecstatically, and an awestruck stillness engulfed the room. Local kirtan group Mirabai and Friends complemented the Divine Play with their celestial chanting throughout the evening.

Two days later, 30 souls from three countries gathered at the Institute of Noetic Sciences amidst the sun-drenched, rolling countryside of Petaluma (just north of San Francisco) for the weekend retreat.

Louix began the retreat with a ceremony in which he invited us to silently surrender some aspect of ourselves that we wanted to let go of, and ask for something of the Divine that would help us fulfill our missions on Earth. He gifted each person a heart-shaped rose quartz crystal as prasad, which he silently imbued with a unique quality that would empower and bless us for the rest of our lives. 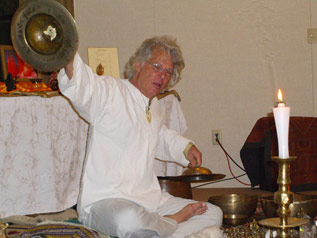 The next morning, kirtan group Jagadamba sang for hours while Louix traveled the room, delivering shaktipat to each person. Once he had everyone filled with Divine love, he tenderly guided us into the "courtship with The Beloved" by having us stare into another's eyes to experience God loving us in and through them. Events of the day also included Louix's giving in-depth counsel to several individuals, discourses on various topics, and his leading an outdoor Mayan sun salutation, teaching everyone how to harness the sun's healing and revitalizing energy. After dinner, the evening concluded with another special treat: an otherworldly ceremony performed by Karma Moffett with his collection of antique Tibetan bowls, bells, longhorn, "tingshas" (small cymbals), and conch shells. 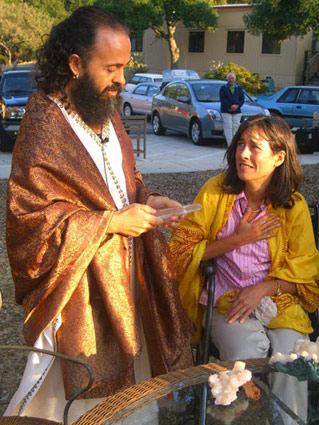 The blessings continued on the final day of the retreat. Louix led a meditation in which we radiated our gratefulness, becoming the vessels for God's love to flow unto and throughout all of Creation. At the closing of the retreat, many shared their powerful and often miraculous experiences during the weekend. After three days of constant communion with God, we left Petaluma uplifted, inspired, and awestruck by the transformation that came from a love so pure and profound. How fitting and perfect it was that a documentary film was being made of this retreat and of Louix's five days in the Bay Area, ensuring that the Darshan and love was captured for posterity and will now be shared with the world. We give our heartfelt thanks to everyone who helped create these events and host Louix with such grace and devotion, including:  Prem Daas and Laura Brainard (co-producers of the events), Margaret Hamilton, Susan Lissberger, Michael White, all the local volunteers, Open Secret Bookstore, Mirabai & Friends, Jagadamba, Karma Moffett, Briksha Heart Yoga, filmmakers Bill Russell and Eric Wendt, Medicine Buddha Temple, the Spiritual Enrichment Center, and The Institute of Noetic Sciences.

Thank You, Louix, for blessing us with Your love and wisdom at these beautiful events, which have truly embodied your own proverb, "God is infinite love, infinitely expanding..."