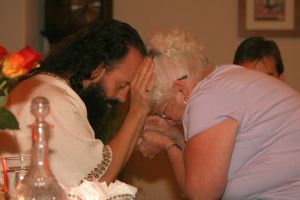 On November 14th, Louix Dor Dempriey gave darshan to eighty-five people at a private home in Las Vegas. Markus Kasunich, Louix's personal assistant, gave an introduction and an opening prayer, and then led the group in chanting "Pranananda Om's" (Louix's Sanskrit name is Bhagavan Sri Pranananda). Louix then began the event by guiding the group on a meditative journey, wherein each person traveled into a moonlit forest and communed with a fairy. As we were softly drawn out of meditation, each person came to the feet of the Master, one by one, to receive his blessing. Louix entered the transcendental state of consciousness known as samadhi, and, for the next three hours he gazed deeply into each person's eyes, delivered guidance and Revelation, and beheld everyone as his children with a compassionate, love-filled gaze. As his love filled everyone's hearts, some sobbed uncontrollably, some bowed in reverence, and some people's bodies shook as the Divine energy coursed through them.

After the last person came before him, Louix sat quietly for a moment with his eyes closed and continued to radiate his energy to the entire room. A palpable feeling of peace and love now overflowed from everything. As one participant said, "Each of us, in our own way, knew that we would never be the same." 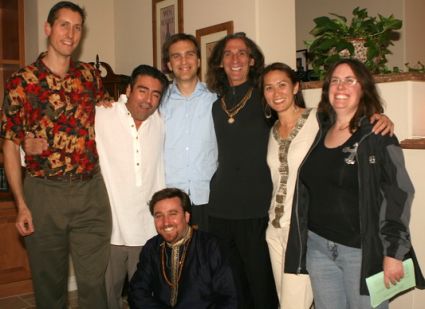 We are excited to announce that Louix will be returning to Las Vegas for more public events on February 20th and 22nd. Please see our Upcoming Events section for more details, or register through the Awareness & Consciousness of Southern Nevada Meetup Group.