On July 9th, Louix departed for his pilgrimage to Mount Sinai, Egypt. Samantha joined him on this 17-day journey, which also included visits to Morocco and England. The trip began with a 20-hour layover in London, enabling a quick site-seeing tour, as this was the first time Guruji had visited London. He and Samantha took the London Tube to the South Bank of the Thames River, crossing the Westminster Bridge for a stroll and a ride on the London Eye, the world’s largest cantilevered observation wheel. Depending on the day, you can see as far as 25 miles of city from all angles in the observation capsule. The remainder of the evening was spent strolling through Piccadilly Circus and through London’s Chinatown. 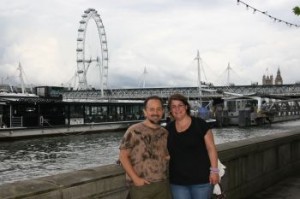 The next stop was five days in Marrakech, Morocco. This is an extremely lively city, with a center square called Jemma El Fna that is filled with activity, including street performers, snake charmers, more than 100 food stands, souks (small shops selling everything from clothes and art, to dried fruits and lights), fresh juice stands, and thousands of beautiful local people. Louix and Samantha spent many evenings taking in the electrifying sights and sounds of the square. These included a performing monkey, up close and personal sightings of deadly viper and cobra snakes, as well as many fresh squeezed juices and other samplings of the local cuisine. 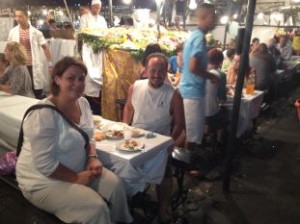 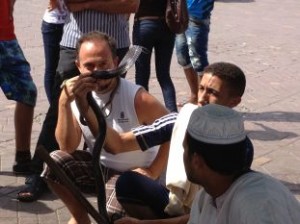 After Marrakech, Guruji and Samantha visited El Gouna, Egypt, a small resort town on the Red Sea. They enjoyed swimming with wild dolphin in the Red Sea and snorkeling around the gorgeous coral reef. On another occasion, they walked around the elegant village and marina, talking with the local people whom were overjoyed to meet Americans. They told Guruji that it has been very rare to see Americans since the overthrow of the Egyptian government in January of 2011 (the U.S. government has strongly discouraged travel to Egypt). The economy has been severely affected by the drastic drop in tourism. 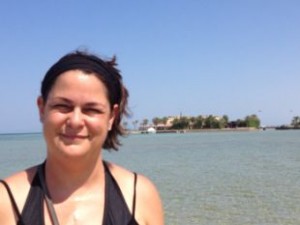 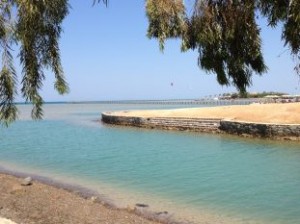 Louix and Samantha hired a car and private driver to take them to Mt. Sinai. Much to their surprise, the main road was closed, as there had been two American hostages taken [they were released after three days] the week prior. This required them to take a nine-hour detour, as well as a police escort for part of the journey. They climbed Mount Sinai on the first day of Ramadan (the Muslim holy month). The journey began with a camel ride up this sacred mountain until they reached the beginning of what is called “the 700 steps”—the last and most difficult part of the climb which can only be done on foot, up seven hundred steps. There, they enjoyed a spectacular panoramic view of miles of mountains. They were blessed with having the entire mountain all to themselves, as there were no other climbers on the mountain that day—or camels! Even most of the bedouins, who live on the mountain and run the snack shops along the climb, were all gone for this first day of Ramadan. After reaching the summit and breathing in the most Divine scene, they meditated for a few hours. Many pictures were taken to capture this extraordinary moment.

After Mt. Sinai, they returned to Cairo for the last few days of the journey. The highlight of the days spent in Cairo was enjoying a home-cooked meal at Mohamed Nazmy’s (the guide from Louix's 1999 pilgrimage to Egypt) house. His wife made a spectacular meal. Dishes included moussaka, stuffed zucchini and peppers, and cinnamon rice with black eyed peas, just to name a few. This was a traditional Egyptian meal, and it was even more special because it was made and consumed during Ramadan. Louix and Samantha then returned home on July 25th, safe and sound. 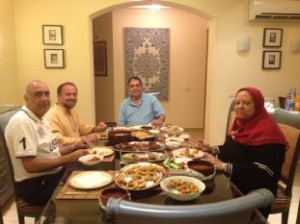