The Gift of Cancer 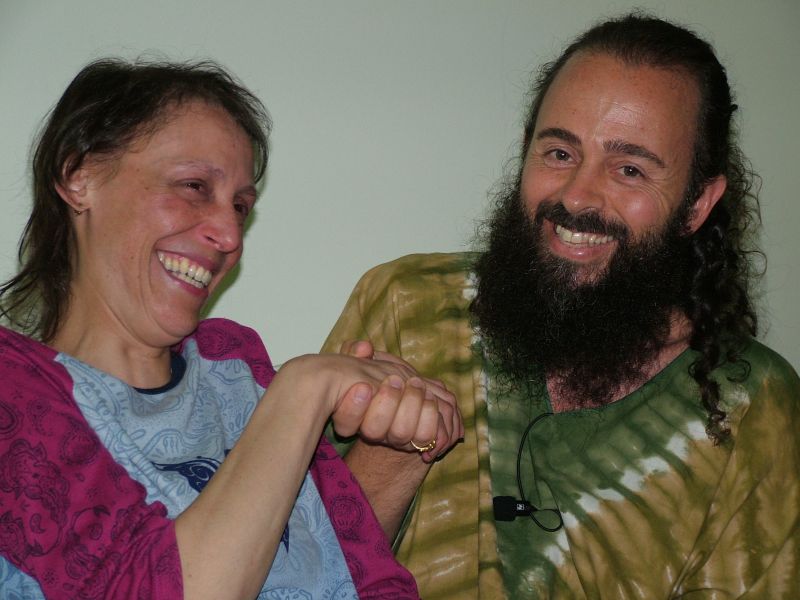 On the 1st of August 2005, I was diagnosed with cancer. I had multiple lumps around my neck and had difficulty breathing. The doctors said I had lymphoma, cancer of the lymphatic system. I did not know what that meant; all I knew was that the lymphatic system was very important to filter out toxins in the body, and, if that wasn't working, then I was in big trouble. The cancer had spread to my upper and lower diaphragm---Stage Three B Hodgkins Disease. I had my sister with me when I received this news, and when I looked at her she reflected what I was feeling---terrified and shocked. My mind was racing. Was I going to live? How could I ever get my mind around that? I was grateful that I had a Guru---Pranananda---in my life so that, no matter what I was about to face, I was not going to have to face it alone. Discovering why I had manifested cancer was going to be the biggest lesson of my life.

Twice before in my life I had to wait for a diagnosis of whether I had cancer. At 27 years of age, I had laser treatment to remove tissues for cervical cancer. When I was 39, about 2 ½ years ago, I had two benign tumors removed from both sides of my groin area. The tumors---Schwannoma, tumor of the nerves---had been growing for the last fifteen or twenty years! When I was told that I had cancer, my whole life changed in that moment. It was the first time in my life that I had to focus on myself or I wasn't going to survive---there was no question about that.

The first step was to talk to Pranananda. I was told that I was going to die in three weeks, even though the cancer had not reached any of my major organs. Pranananda stated that I could be cured by using a special mantra, a vegan diet, urine therapy, and oxygen therapy. Due to the fear I felt at the time, I chose chemotherapy instead of His advice.

One night I woke up feeling as if the cancer was attacking my body. I was in total panic and knew that my emotions were eating away at me. I knew that I had difficulties in expressing my emotions and was not even able to cry about it. I had to immediately phone Pranananda. Of all the people on this planet, if I didn't let Him help me I was going to be in big trouble. My emotions were so painful, but the choice I faced was to feel them or let them kill me. I had to learn to love and care for myself. That was the most difficult thing for me, as I had always focused on caring for other people.

In one of the phone calls with Pranananda, I had to choose to live or to die. It wasn't easy for me to make that choice. Why? I'd rather die than feel the pain. So, again, I was grateful to have my beloved Pranananda to assist me and allow the process of healing. Thank You for not judging me, and for allowing me to be, even when I did not fully listen to You.

After my first treatment of chemotherapy, I spent six days in hospital with horrible infections. I had a high fever and high liver cell count, and these two factors alone were enough to kill me. I was so ill, for a moment I even forgot I had cancer! I know that Pranananda had intervened to help me to stay alive.

For the next five months, I waited for Pranananda to arrive in Australia; He was coming for a retreat at the end of the year. That was what kept me alive. No matter what I went through with the chemotherapy, I knew that if I did not fully accept why I had manifested the disease in my body, the cancer would surely return.

The Melbourne retreat was an extraordinary event. I was well looked after, and even had a bed set up at the back of the main room for me to participate with everyone. If I needed to rest I was able to, without leaving the room. In past experience with Pranananda's workshops and pilgrimages, I knew that everyone was cared for, no matter what their condition.

When the time came for me to address my healing (why I created the cancer), Pranananda came to sit with me at the back of the room where my bed was set up. Everyone turned to face the back of the room, and many people left their seats and sat in front of me. Pranananda worked with me to help me discover why I had created the cancer. We also explored why I chose the chemotherapy over the guidance of my Guru. Apart from the fear I went into, there was a voice in me saying "chemotherapy." Why? He explained that I wanted and needed to prove to myself that people really do love me and keeping the cancer was the means I chose to heal the false belief system that I was unlovable. I chose to experience the hardship over the Grace of God, so that I could prove to myself that I was lovable, by way of having so many people caring for me during my many months of chemotherapy.

Then, Pranananda invited a few people to look into my eyes and say what they love about me. I had to really "get" that I was loved by others. I was in tears and felt everyone's wide-open hearts. There was no-one in the room without a tear in his/her eyes. Meanwhile, Pranananda was working on my body---physically and energetically---to transmute the cancer. I felt that happening within my body and actually felt like I had wings coming out of my back, like the wings of an angel. I felt like the wings were stuck, but Pranananda reassured me they were fully open. I commented that, "I'm glad You can see more than I can!" Pranananda often calls me an angel!

The process took more than two hours, and, at the end, I felt totally transformed. People said they could see a huge change in my face, and I felt it in my whole body. I was glowing. Prior to the retreat I was feeling lousy. I had constant nausea, reflux in the stomach, and fatigue. I had chemotherapy the day before the retreat and should have been feeling its effects by the next day, the day of my healing. Instead, after the healing I felt really good; I was shining like an angel.

Everyone had participated in the process of my healing. I felt the cancer being transformed and leaving my body. By the time the retreat began, I had the courage to face the distorted behaviors I had been indulging in---behaviors that had prevented me from healing this disease. It was not easy; but during my healing I felt safe. I knew that no-one was judging me, and I finally stopped judging myself. I understood that we all have things we hang on to that stop us from being close to God. At the end of the retreat, I looked at Pranananda and experienced the full current of God roaring through my body---much better than the chemo! I hope that I can gift my experience to others, to help them come to God.

Pranananda helped me to change my thoughts, and to allow the gift of the cancer to take place within me. I had to know, feel, and believe that I was lovable. This allowed other people to heal, as well. Thank You, Pranananda, and everyone at the retreat who opened their hearts to me. Thank you to all my ashram family, biological family, and friends who helped to prepare me for the healing at the retreat. I felt truly loved and cared for.

The most profound saying that Pranananda spoke during my healing was, "You cannot be all things to all people, but you can be everything to yourself."

Thank You, Pranananda. I am so blessed, I am so grateful!

I love You with all my heart,