What are all these circles appearing in the photo? 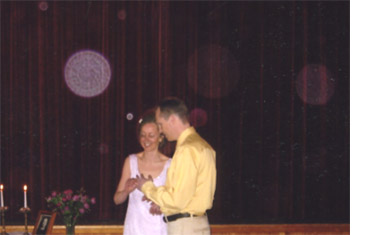 Q:  Here is a photo that was taken recently at our wedding. Could You tell me what are all those circles appearing in the photo?

A:  The strange phenomena all around you in your wedding photos are spirits which were captured on film. Whenever “spirit” is captured on film, it is commonly known as ectoplasm, living (or divine) energy which may or may not be holding—at least, visibly—a physical form as matter. This particular type of phenomenon appearing in your photo is known as an orb.

They are, essentially, beings; in your case, some of the many, many angels who not only walk with you on a daily basis, but who were/are in great celebration on this momentous day (who doesn’t like weddings and parties?). Orbs do not exclusively represent angels, nor were there only angels present at your wedding. Deceased family members, nature spirits, other astral beings, extraterrestrials, et. al. are around all of us all the time. Rest assured, the ones appearing in your photo are all very loving in nature, and very happy!

You can do an Internet search, under “orbs,” and see lots of photos of them. We have many pictures of orbs in our ashram photo archives. They are captured quite often on film here. There was one very auspicious thing about yours, however. I have never seen such intricate patterning, as is evidenced in your photo, within the large orb on the left. Very nice.