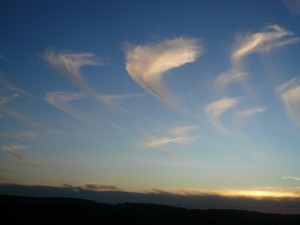 I got back from Laguna after six days of being at the ashram, feeling amazing and light and full of energy. They were incredible days; the energy there is amazing! The weather was beautiful! At the Darshan this time I got to experience the "Heart Opening," which was intense energy flowing through my body, heart pounding, outside—induced pranic breathing (almost hyperventilating), and then extreme sobbing. I was taken to Pranananda. He held me close and tight and told me that our past life together ended tragically, and that was the reason I was so resistant, but also why I felt I knew him and was so drawn to him. So he erased the cellular memory from my body (of the pain from that past life), and I fell to the floor afterwards in a fetal position and sobbed for a long time in Zim's lap. Pranananda later told me, in our audience the next day, that it was like an internal implosion. It really felt like that. It was incredible! After that, I was blissful.

I was granted a private audience with him at the last minute on Sunday morning, along with my friend Donna, and I had just fifteen minutes to get ready. It was amazing to sit in front of this man and listen to him and talk with him about everything. I got the whole thing on CD, thanks to Markus, who said, “That way you won’t forget what he tells you.” Donna and I listened to both of our recordings together on the way home. It was enlightening to listen to each other’s experiences..

I was talking Sunday night with the disciples about angels, and I said I was fascinated by them but didn’t believe in them. They said, "Have you ever asked to see them?” I said "No." So, that night I did ask. Well, the next day (Monday night), I walked out to watch the sunset and, lo and behold, the clouds that formed in front of me manifested as angels. I was smart enough to take my camera, and now I have proof that they exist and showed themselves in a way that wouldn’t frighten me. I showed the photos to Pranananda and he exclaimed: Wow! He was exuberant about the photos, and so were the disciples. Zim said they showed up in legions for me!

So this trip was amazing! All the disciples were wonderful and supportive. The vegan food was awesome, and I didn’t sleep as long as I usually do. I was also up early every morning with all kinds of energy. The energy and vibe at the ashram was like nothing I can explain. I felt at "Home" with these people, and I love them and Pranananda so much. I truly believe that Pranananda is my Guru. What amazing things I felt and was shown in his Divine presence… and his love is beautiful.