A Taste of Omnipresence 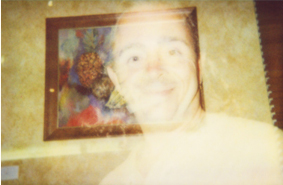 This photo was taken on February 6th, 2001 by Grant, a seven-year-old boy from Sydney, Australia. His mother, Coral, was with him while they watched in astonishment as the image of their beloved Guru spontaneously materialized on a Polaroid photo taken in His absence. The gift of renewed and deepened faith that this photo brought to one little boy, his mother, and to all who see it is so simple and yet the most powerful truth of all—that God is with us always. This is the story of the miracle photo:

Grant had come home from school early and was very quiet. For anyone who knows this little angel, that is not his usual state of being. He was sitting at the opposite end of the table from me, next to his beloved Guru, and everyone could feel his sadness and pain. Louix asked Grant what was wrong, so he explained that no one at school would talk or sit with him. Children had been either teasing him or ignoring him.

It broke my heart to see the confusion on his face at being treated that way. This little boy is such a beacon of love and light. It is hard to understand why he wouldn’t have children around him all the time. Louix sat down with Grant and lovingly shared a story from His own childhood about a time when He had felt like Grant did. Louix explained some of the reasons why Grant had been treated the way he was. Louix told Grant that, when He was his age, He, too, had not been able to understand the world or how and why people were so hurtful. He explained how He had wanted to die because of the pain and, at the same time, He loved life so much that He felt trapped. Basically, it was too painful to stay and too painful to leave.

Louix explained to Grant that his love for, and connection with, God that so effortlessly shine from him were among the reasons children were behaving the way they were. He told Grant that many people are afraid of the angels and beings that he sees, so he needed to be careful with whom he shared these things. Louix taught him about the “bridging race” of souls, which included Grant’s, and of how they are here to assist people in the transition from the illusion of separation—in which the world as it is known today lives—into the world of ultimate reality, a world of oneness and in perfect love with God. He also assured Grant that he would begin to make friends with other children who also had experiences like his, but had been afraid to share them because they, too, had been ridiculed.

Louix assured Grant that He is always with him, no matter where he is, and He asked Grant to call upon Him whenever he felt afraid, alone, or unsure. He asked Grant to remember that when the children are teasing him, it is because their hearts are hurting and that, if Grant gives them love in return, he will help them to heal their hearts—as well as his own. Grant was definitely happier when he left that evening, and he agreed to go to school the next morning.

It was about 10:00 a.m. the following morning when Grant, his mother, and a friend came over to the house where Louix and I were staying. They burst through the door, talking wildly of a miracle that had happened earlier that morning.

Despite the talk with Louix the night previous, Grant had again become very agitated and angry about having to go to school. He was saying to his mother that he did not want to go and, in a mixture of anger and sadness, picked up his little instamatic camera, turned around, and took a photo of the painting on the wall behind him. He did not know why he did; he just turned and took the picture.

He pulled the picture from the camera and, as it was developing in front of him, called to his mother and asked what was the image that was appearing in front of the painting. As it developed further, it became clear to both of them that Louix was materializing in the photo. His image was transparent—almost ghostlike. Coral was at once mystified by what she saw and in the full realization of the profound miracle that had just happened. She asked Grant if he now believed that Louix was with him always. Grant nodded that he did, indeed, now believe.

Later that morning, Coral took the photo to a photo-finishing laboratory to enlarge the image, since the original was relatively small. When asked to comment on the photo, the salesman behind the counter looked at the picture and said to Coral that it was “obviously a double exposure.” Coral looked the man in the eyes and said, “No. It is Spirit.” Coral asked the man to explain how this photo could be a double exposure. He explained how the last image taken with a camera can appear in the next picture, noting that—in this particular case—the image of the person would have been the most recently taken photo.

Coral then said that it could not possibly be a double exposure, because the man in the photo was not present when the photos on her son’s camera were taken. The salesman looked stunned.

Upon hearing his mother’s recounting what the photo lab technician said, Grant began showing signs of doubt about the morning’s miracle. He remembered taking pictures of his Guru the night before and, putting two and two together, figured that the last picture he took of Louix the previous night doubled with the one he took of the wall in his kitchen the following morning. He said that he had double exposures on the camera before, so maybe this wasn’t really a miracle after all.

Without missing a beat, Louix smiled and asked Grant to bring the photo over to Him. Louix quickly shielded the photo from this little angel and then asked Grant to tell Him what He had been wearing the night before. (The rest of us in the room were wondering where Louix was heading with this line of questioning.) Grant recalled that it was a green outfit. He then asked Grant to tell Him how He was wearing His hair that night. Grant immediately recalled that Louix’s hair was hanging loosely over His shoulders. Louix had also worn His glasses the previous night, reminding Grant that He always wears them to the movies. Lastly, all four of us presently in the room remembered that only group photos were taken at the movie theater—none of Him alone.

Louix then showed His young disciple the photo he had just taken that same morning. As you can see in the photo, Louix appears without eyeglasses, is wearing a cream-coloured outfit, and His beyond-shoulder-length hair is pulled back into a ponytail. Grant’s face was again beaming!

Louix went on to say to Grant:  “I am everywhere at all times. All you need to do is call upon Me and I am there. In fact, I came into your photo, My beautiful boy, to show you and all My children that even when you do not call upon Me, even when you doubt, fear, or disbelieve in Me, I am still with you. And I shall always be with you, now and until the end of time.”

The beautiful gift of this photo was not only for the benefit of one little boy. It was another opportunity for the world to see the truth—that God is with us ALL in every moment of our lives. We need only to open our hearts and receive the bountiful gifts that He offers.