I had gone down to visit Prana Shakti, our ashram just outside of Hobart, Tasmania, to spend time with my disciples there. I had known that their dog, Henry, was old and ailing, to say the least. When I got there, what I saw upon walking in the door just had me in utter horror:  Henry was so completely and totally emaciated. I instantly saw that he wasn’t even a dog anymore. This dog was fully in his light-body and had essentially died about a year-and-a-half ago. My heart hurt so much that I almost fell to the ground upon seeing him. The people's attachment, desperation, and anguish were keeping this dog alive, against his will and even against the laws of nature. Henry appeared as a skeleton that looked like it was spray-painted with hair. He could barely stand, walk, eat, or move. He was barely breathing, and his chi was at about three or four percent. Henry was here "but for the grace of God"---just for them---because they refused to let him go.

Peter’s beloved, Marianne, had passed on less than a year prior, and she was very close to Henry. Henry was the light of her life. So, everybody at the ashram felt that, by keeping the dog alive, they were vicariously keeping Marianne alive and thereby keeping the last thread (in their minds) of attachment to their earthly life with Marianne.

On the story went... until I got there. I knew, upon walking in, that the first thing I had to do was to cut their cords of attachment and fear, and help this dog to move on. So, I sat down with Henry and had a little private ceremony, just him and me. I whispered to him and said, “Don’t worry, I will take care of this.” He thanked me and begged me to help, saying, "Thank you so much. They just won’t let me go... they won’t let me go."

I waited for the opportune moment, gathered everybody in the community together, and we all sat in the room around Henry. He had a special pillow in front of the fireplace, which was his spot. Now, for these last two years, he almost never got up from there. At first, upon sharing what I am saying now and what I was about to say to them, there was an unspoken level of disagreement (for various reasons):  thinking I was either exaggerating, or making more of it than it was, or that what I was saying simply wasn’t so. From their point of view, the dog was still walking, eating, and functioning, but they had blinded themselves. Their attachments, their pain, and their fear had blinded them to even see the truth. Coupled with that, Henry was putting on a facade for them, using every ounce of strength he had to hide the sheer agony that he was in all the time---an agony to which I, as the story goes on, was witness.

Before we had this gathering, there was a moment when everybody was out of the house, and I was there by myself, alone with Henry. At one point, Henry slowly started to get up to go outside. There was a little landing outside the back door and it was only one small step higher than ground level. It wasn’t even a step like one on a staircase; it was just a slab of cement. It only rose about four inches, maybe five, but much less than the height of a standard step. The dog stood on top of that tiny landing, staring off the side of it, like he was looking off the edge of the Grand Canyon, some 2,000-3,000 feet below him; as though he would plummet to his death if he were to step these couple of inches off the cement onto the earth... not to mention how he could even do it, since he clearly had almost no command or power over his legs---something nobody here seemed to notice, and something Henry had successfully hidden from them all (out of his love for them) and which I alone was now privy to see.

I sat quietly. I didn’t move a muscle. I blocked Henry from feeling my energy or knowing that I was watching him, so that he wouldn't know anyone was watching. I saw this dog stand there for almost a minute before he summoned the courage to take that one step off the landing, so that he could walk on the earth. When he finally did, his legs wobbled, his whole body shook, and he was filled with fear. He looked as though his legs would crumble and his bones would break beneath the weight of his beyond-frail body.

He hobbled about ten feet to a spot where he could hopefully lie down on the grass in the shade. Every time he tried to bend his legs, he would wince in pain, bearing facial expressions just like a person in extreme pain would do. The side of his mouth pulled to the side, stretched, and his eye wrinkled and stretched on the side. With every attempt, he would barely bend his legs an inch and try to lower his bottom, in an attempt to sit down---something all dogs instinctively do all their lives---but he couldn’t. He tried to lower his torso but couldn’t. He then began to walk slowly in circles, falsely believing (and yet hoping all the same) that if he went around and around enough times, he would wind up in a lying position without ever actually having to bend his legs. When he finally reached the ground, he winced again and just sat there. The whole drama took him several minutes:  to walk fifteen feet from the fireplace to the back door, and then another ten feet out onto the grass and lie down. This was something that, in his heyday, would have taken him less than thirty seconds, but it now took minutes... because nobody was around, so he didn’t have to hide. He never let them see his true level of pain because he knew they didn’t want to let him go. Seeing this really wrenched my heart even more---the violation that was going on here.

As I was saying, I gathered everybody together. Henry was back on his mat, in front of the fireplace. We all sat in a semi-circle around him, and then I started by saying, “This dog died a year and a half ago. He is in his light-body. He is only breathing because you folks won’t let him go. You have got to let this dog go.” I had my hands on Henry most of the time I spoke. I was simultaneously and telepathically speaking with him, and it was just so beautiful. Little by little, one by one, the beloveds in the room were surrendering. People started crying and saying, “Oh, I felt that all along and I knew.” (Only yesterday, when I first arrived, they were saying, “He is fine, he is doing much better,” when I asked them how they felt about the dog.) Today was the Day of Reckoning, and now it was my turn to take a stand for this poor dog. “Folks, wake up! This dog died a year and a half ago.”  I shared with them what I witnessed when no one was in the house, about how this dog could barely stand, walk, or even sit down.  I revealed to everyone how Henry had been using all the love and the strength he could muster, calling God’s help (no doubt) to hide it from them because he knew they wouldn’t let him go.

By now, everybody was crying, apologizing to me, and apologizing to Henry, saying, “Oh, I knew. Why did I do this?” Next, I had them each come up to the dog, one by one, to apologize, tell him how much they loved him, and give him permission to leave this world. The whole ceremony took about an hour. In the end, Henry, our beautiful ashram dog, was finally at peace and thanked me with all his heart. I was sitting next to him throughout the whole rite of passage, with the semi-circle of beloveds formed around us.

I was speaking to the group about Henry's ties with Marianne, his need to go, and his wanting to move on. "This is what really serves him best and, really, what will connect everyone to Marianne’s spirit far more than torturing a dog that wants and needs to die." While I was talking, I happened to turn my head and notice today's local newspaper on the floor behind Peter (Henry's owner). On the cover was a full-page color photo of a middle-aged woman---similar to Marianne---with her dog, a dog just like Henry. The title of the cover story on the newspaper---where they live, on that same day I was there for this whole event---read something like:  “Saved at Last---a Woman Reunited with Her Dog.” (Interesting that the paper, which had been sitting, face up, right in front of everyone, was only noticed once everyone had gone through the healing and had agreed to go through with the euthanasia and finally let Henry go.) So there, on this newspaper, is the woman (symbolic of Marianne) hugging her dog, with this big, beaming smile on her face. I picked up the article and said, “What do you think of this? How auspicious is this! On today’s paper, on the day I am giving you this talk, Marianne will be reunited with Henry.” Everyone burst into tears, crying with happiness and joy at the synchronicity.

When all was said and done, Peter’s daughter, Monique, quietly reached into her pocket, pulled out her cell phone, and innocuously took a picture to capture this moment for posterity----not thinking anything... just a little, quickie, low-grade photo on a cell phone. Then she said, “Oh my God. Pranananda, You need to see this.” She turned to show me, and there was a picture of Henry with these two colored floodlights for eyes! His dog eyes were gone:  one was pure gold and other emerald green, the color of the heart chakra… just pure light. There he was, in his light-body---just as the Master had told them---happy as a clam, and ready to go.

We made an appointment with the vet to come and euthanize Henry the next day (her first available appointment). We were going to hold the cremation right here at the ashram. We were going to build a giant funeral pyre (for which we obtained a fire permit from the county) and cremate the body right on the same property where he spent the final years of his life. It was all so beautiful. 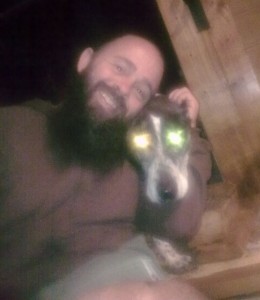 Everybody got to witness, first-hand, the power, the presence, the grace, and the divine orchestration of the Creator, in its glory and in its fullness. The lesson here is that we just need to get out of the way, and let Nature flow according to its own perfect order and timing and place. With God, all things are possible.

Thank you, Henry, for gifting us all such a wonderful, heart-opening, and transformational experience... but, mostly, thank you for giving us the joy and the privilege of sharing so many precious years with you. You truly will live in our hearts forever.